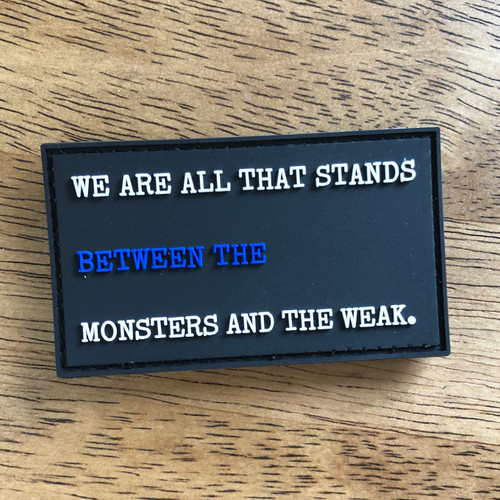 The "thin blue line" is a term for the police that is used to assert that they are the line which keeps society from descending into violent chaos. Explaining this concept (describing the thin blue line symbol) to kids when giving them a patch I say, “The top part represents the good people of society. The innocent. The bottom part represents bad people, or people that want to harm the good people of society. The blue line in the middle represents law enforcement.” I then go on to point out how the blue line is the only thing that stands between the bad and the good, just like the police of the world.

Usually the kids leave with a smile at their new found understanding of the trinket they’ve just received. Hopefully a seed of trust is planted, and they know that we will always be there for them.

This concept is summed up perfectly in the closing line of the poem by Michael Marks.

“And maybe remind the few, if ill of us they speak, that we are all that stands between the monsters and the weak.”

This patch is an homage to the words of Michael Marks, and the concept of the Thin Blue Line.